Posted by argentumvulgaris in America, Occupy Wall Street on November 20, 2011

But this is not happening in Iraq nor Afghanistan. It is happening in the USA, and what is even worse is that it is being used against non-combatants, US citizens, peaceful protesters.

Things are getting out of control. And, I don’t mean the protesters, I am talking about the AUTHORITIES! The ones who are supposed to be protecting the American people.

A US university says it is launching an investigation into the use of pepper spray by riot police trying to clear a demonstration.

An officer appeared to spray the protesters at close range

Video of the incident at the University of California, Davis, shows officers blasting seated protesters in the face with the chemical at close range.

The university chancellor, who had called in the police, described the pepper spray incident as “chilling”.

The protest, on Friday, was in support of the Occupy Wall Street movement.

It was intended to show solidarity with protesters at another branch of the Univeristy of California, in Berkeley, who were hit with batons by police on 9 November.

The footage of the pepper spray incident, which has been circulated widely on the internet, has caused outrage among students.

(Watch this video clip, these are the cries of Americans!  These are the ones trying to change things for YOU!)

The protesters are seen sitting in a line on the floor with their arms interlocked, refusing to move.

They try to cover their faces as officers in riot gear walk along emptying canisters of the spray onto them.

Linda Katehi, Chancellor of the University of California, Davis, near Sacramento, says she is forming a task force to investigate what happened.

“The use of pepper spray as shown on the video is chilling to us all and raises many questions about how best to handle situations like this,” she said in a message on the university’s website.

The Davis Faculty Association, which represents academic staff, has condemned the University of California’s approach to protests on several different campuses.

“This week, we have seen excessive force used against non-violent protesters,” said a statement on the association’s website.

When this kind of thing happens in Tienanmen Square, Egypt, Libya, Syria and Yemen, your government cries “Foul!” Then the hypocrites do the same thing to American people… there’s something bloody crazy going on.

The police departments have been bought lock, stock and barrel by the 1%, the 99% don’t count, they are the troublemakers.

Sure, the 99% are troublemakers, because the other 1% are immune criminals and nobody is trying to bring the bastards to justice, or using pepper spray on them.

Posted by argentumvulgaris in America, Occupy Wall Street on November 19, 2011 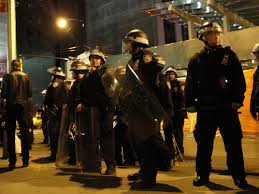 These were the only RATS found in Zuccotti Park

Filth-ridden Zuccotti Park is a breeding ground for bacterial infection loaded with potential health-code violations that pose a major risk to the public, an expert who inspected the area warned.

“There’s a lack of sanitation, a lack of controls for hot and cold water,” Yon said. He saw at least 15 violations of the city’s health code — the type that would easily shut down a food establishment.

Posted by argentumvulgaris in America, Occupy Wall Street on November 15, 2011

The bastards did it!

They cleared Zuccotti Park in a surprise move. No publicity this time, no time for the OWS to get organised.

“Protesters and police officers clashed in the streets of lower Manhattan this morning, hours after dozens of NYPD officers in riot gear entered Zuccotti Park to clear out the Occupy Wall Street headquarters.” – Newsday.com

“The area around the park was sealed off and journalists were prevented from entering. Some of the activists accused police of using excessive force and pepper spray.” – BBC News

““After this we get bigger. There is no question we get bigger. This is our chance to be heard,” added Jennifer Sarja, 38, who had been bringing blankets and food to protesters staying in the park. “ – The Globe & Mail

“One protester at Foley Square, Nate Barchus, 23, said the eviction was likely to galvanize supporters, particularly because a series of gatherings had already been planned for Thursday, the protest’s two-month anniversary.

“This,” he said, referring to the early-morning sweep, “reminds everyone who was occupying exactly why they were occupying.”” – New York Times

New York City Mayor Michael Bloomberg (arsehole) has made the biggest mistake in political history. He has fueled the OWS beyond their wildest hopes. If ever the 99% wanted more free publicity, they just got it. The best political publicity available… a politician being an arsehole!

This is their chance; the match has been struck.

This is the chance for OWS to be heard thundering throughout the land. And the 1% should be trembling with fear.

NYPD get the Riot Act Read to Them

Posted by argentumvulgaris in Occupy Wall Street on October 19, 2011

Yes, and by an OWSer telling them how it is.

What is the purpose of a police force? To protect the people. The people, yes, 99%; NOT just appease the 1%.

The police are on the wrong side in this argument; and who put them there? Your politicians and by the virtue that your politicians were bought and paid for, the 1%.

“United States Marine Corps. Sgt. Faces Off With the NYPD”

United States Marine Corps. Sgt. Shamar Thomas: “There is no honor in what you’re doing to these people. No honor. How do you do this to people? How do you sleep at night? You’re here to protect them. You’re here to protect us. Why are you hurting U.S. citizens? If you want to go kill and hurt people, go to Iraq… do you get honor out of this? Why are ya’ll doing this to people? Ya’ll are walking around here in riot gear – these people don’t have guns. This is not war. This is not war. There are no bullets flying out here. How tough are you? There is no honor in hurting unarmed civilians.”

This article has been contributed by SHTF Plan. Visit www.SHTFplan.com for alternative news, commentary and preparedness info.”

I got it from Running ‘Cause I can’t Fly, thanks CP.

Posted by argentumvulgaris in America, American Spring, News on October 3, 2011

#OccupyWallStreet Protestors: Police Led Crowd Onto Brooklyn Bridge, Then Maced And Assaulted Us

“Protestors at the front line of yesterday’s Occupy Wall street protest, which led to the arrest of 780 activists on the Brooklyn Bridge, says the police allowed the crowd the march onto the Brooklyn bridge where they were met by a brigade of police officer’s who aggressively elbowed, punched, tossed, dragged, and maced them. A NY Times reporter arrested on the scene with the protestors initially reported police allowed them to enter the Brooklyn Bridge, then blocked them in and arrested them. The NY Times changed their story to match the official police version 20 minutes later, saying the protestors entered the bridge despite repeated warnings not to enter the bridge.
Yesterday, I documented in real-time the unfolding events at Brooklyn Bridgewere over 780 people were mass arrested in a police setup. The event was streamed live to over 20,000 live web cam stream which switched back and forth from cameras set up at threes separate locations along the march. Since then hundreds of thousands have watched recordings of yesterdays videos. After the live streams went to playing previously recorded videos of the turmoil as it unfolded, I then documented the corporate media reports from news sites who had reporters on the ground and were reporting live on the situation.As I wrote in the above article, I did so before the story disappeared or changed. As a very popular post on Reddit points out  it only took 20 minutes for the New York Times to revise history.

Click image for larger size.
NY Times revises initial reports of Brooklyn Bridge arrests.
The revision of the article would be acceptable if the original story was provided by a third party source who was later found to be unreliable or if new information discredited the first source. But that is not what happened here. Colin Moyniham, who I have been in contact with recently about an article on the protests I am highly anticipating being published, has in fact co-authored other articles on the protests with Natasha Lennard. Now the kicker is Natasha Lennard was with the protestors on the bridge who were kettled and arrested and was the source of the information in article. Apparently, since the police have stated that report is not the official version, the NY Times had to disregard the version of events as reported by the protestors and even their own reporters who were caught in the middle of the anarchy.
Source: Running ‘Cause  can’t Fly. Read more to verify for yourself.