Posted by argentumvulgaris in Global economy on March 27, 2013

Reblogged from: The Liberated Way

Savings are no longer sacred, they can be stolen by banker or bureaucrat.

I play chess, often that knowing experience arises when I see my doom, wherever I move I am checkmated.  It is my opinion that in the endgame

Cyprus faced a similar chess ending, they were going to lose whatever they did. Nobody will now invest in Cyprus, all the savers will run taking what is left of their savings with them.  The banking industry of Cyprus will collapse, the Russians will flee taking all their trade and money with them.  A main source of employment will evaporate for Cyprus citizens as the Russians flee on the back of loss of credit and their savings.

For me a citizen of Britain, a spectator of events in Cyprus, a person who looks to banks for his personal and business banking needs, a dread of what has just unfolded.  Ordinary citizens of Cyprus had worked hard to save, their earnings already taxed, what for some was their life savings, a third or more has been stolen from them on the whim of politician and banker.  The reported unfortunate business who was half way through a transaction, the proceeds of the selling of a restaurant will be grabbed before they could move to use those proceeds for investing in their business. From a business and a personal point of view I am aware that money may no longer be safe in banks.

How it is – A Fairy Tale

Posted by argentumvulgaris in America, Global economy, Politicians on February 25, 2013

Posted by argentumvulgaris in America, Global economy, Politicians on December 23, 2012

Looks like the USA is about to meet the ‘fiscal cliff’.

The Republicans have withdrawn their Plan B and there is nothing else on the table that would appease the Obama admin, and there is unlikely to be within the next ten days.

I rather hope that the moment arrives, because it’s about the only thing that shows promise of a solution to the greed of the 1%, the bankers and Wall Street. Of course, it will have serious ramifications for the rest of the world, but given the current climate, I think it is necessary to bring the world back to some form of sanity because anything suggested by the government would take eons to reduce the debt and reduce spending. It might just bring America to heel with regard to military spending. No money, can’t fight wars and kill innocents. The whole system has become one massive failure.

Maybe that’s what the Mayans were on about when they didn’t extend their calendar making all believe that it would be the end of the world.

Posted by argentumvulgaris in Global economy, Political Humor on December 10, 2012 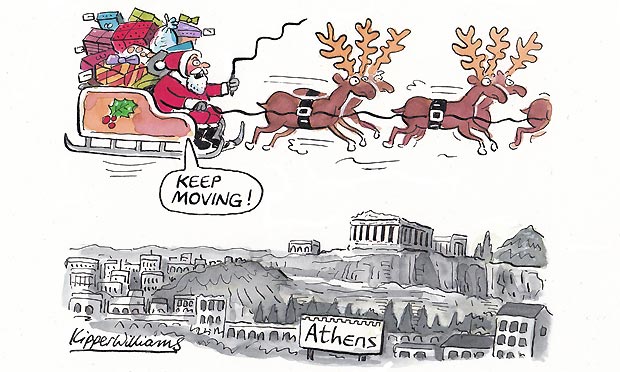 Treasury to crack down on UK’s offshore tax havens

Posted by argentumvulgaris in Global economy on November 25, 2012

The Cayman Islands: will they really come clean about their tax practices? Photograph: Martin Barraud/Getty Images

Radical plans to force the UK’s tax havens to reveal the names behind hidden companies, account holders and trusts have been drawn up by the Treasury.

The news has delighted tax justice campaigners, who predict that the move, which is expected to be unveiled in the chancellor’s autumn statement and come into force in 2014, will have major consequences for those trying to hide their money offshore.

A leaked document reveals that the UK plans to impose its own version of the US Foreign Account Tax Compliance Act (Fatca) on the crown dependencies of Jersey, Guernsey and the Isle of Man, as well as its overseas territories, such as the Cayman Islands.

Fatca, which will come into force in the middle of next year, requires foreign banks to report American account holders to the US Inland Revenue Service. The draft UK equivalent, seen by the magazine International Tax Review, will require British tax havens to make similar disclosures about UK account holders to UK tax authorities.

“It’s a complete bombshell for these places,” Richard Murphy, a tax expert who has seen the draft plan, told the Observer. “Some people will try to flee, but this is going to change the whole of the offshore market.”

He explained that the draft plan amounted to the UK using US legislation to give tax havens an ultimatum: “It’s either they give the UK the same data that they want to give the US or the UK won’t pass their laws to let data flow to the US.”

The ultimatum is crucial, Murphy suggested. If the UK refuses to pass the laws, its tax havens “might just as well shut up shop since there would be almost no banks or other institutions willing to locate there”.

Steps in the right direction to help the global finance crisis.

Posted by argentumvulgaris in Global economy on November 13, 2012 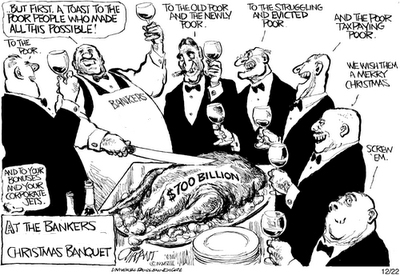 Joke of the Week

Posted by argentumvulgaris in corporations, Global economy on July 16, 2012

“The global economic recovery is still at risk…”

The global economy is a very sick puppy

The idea of a global recovery is a fairy tale. 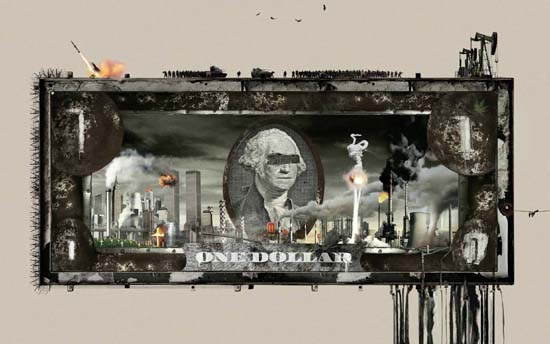 Posted by argentumvulgaris in America, Global economy, Politicians on June 28, 2012

Prime Minister David Cameron has said that Barclays Bank management has “serious questions” to answer over how it manipulated banking lending rates.

Barclays was fined £290m ($450m) after an investigation into claims that several banks manipulated the Libor rate at which they lend to each other.

The Chancellor George Osborne confirmed that HSBC, RBS, Citigroup and UBS are also under investigation.

The scandal hit Barclays shares, which ended Thursday trading down 15.5%.

Barclays had acknowledged on Wednesday that its actions between 2005 and 2009 had fallen “well short of standards”.

Investigators say that Barclays’ traders lied to make the bank look more secure during the financial crisis and, sometimes – working with traders at other banks – to make a profit.

// David Cameron: “The whole senior management team have got some big questions to answer”

Mr Cameron said “the whole management team have got some serious questions to answer. Let them answer those questions first.

“Who was responsible? Who was going to take responsibility? How are they being held accountable?”

Business Secretary Vince Cable said that while it would be “seriously premature” to decide now whether Mr Diamond should be sacked, he added that the Government did have powers to disqualify directors.

“If the facts suggested action – and obviously we would be subject to legal advice; this is a legal process – then indeed that could well follow,” he said.

In a statement to the House of Commons, Chancellor Osborne said: “The FSA report is a shocking indictment of the culture at banks like Barclays in the run-up to the financial crisis.”

Looks like the English have got the banks quivering.

In America the banks have the government quivering.

Posted by argentumvulgaris in America, Global economy, Politicians on May 6, 2012

These are all synonyms of ‘pathetic’ according to a thesaurus.

What is so remarkable about these synonyms is that they all apply to America’s politicians and mainstream media.

America is in the shit, no doubt about it. It’s in the shit right up to its eyeballs. It’s only by jumping at every minute fluctuation of the financial and economic graphs that they can get their noses above the shit long enough to shout, “RECOVERY!” Before being right back in it.

There is (read my lips) NO RECOVERY!

Since 2007/8 there have been no signs of recovery, merely the twitchings of a dying corpse.

The politicians are lying, the mainstream media are lying (by omission). Nobody is telling the truth.

Unemployment is going down and pigs can fly

You want to see how the politicians lie… Take unemployment, they say it’s 8.x% – That’s a lie. They changed the rules about what constitutes unemployment; if you take the formula they used 20 years ago the figure is between 22% – 27%. By changing the rules they can keep the figure low enough for you to swallow and believe in economic recovery.

“Barack Hussein Obama, his government, and his willing accomplices of the Lame Stream Media, have been touting a recovering ‘economy’ since practically the day he was elected. We have breathless media info-babes touting really fractional shifts of economic data as ‘proof of recovery’, while companies continue to close and others to lay off or not hire at all. I’ve been saying all along that this is no recovery… that there was nothing to back up the government’s claims.” – Conservative Outpost: The Recovery Myth, And Other Fanciful Tales.

Face it! There is no recovery, and there won’t be one.

It’s only a matter of time before the shit is over your heads.

The biggest laugh of all is that Romney has all but won the Repugnican nomination to run against Obama by spouting the same policies that created the problem in the first place. If America survives until the election, Romney will hasten its demise.