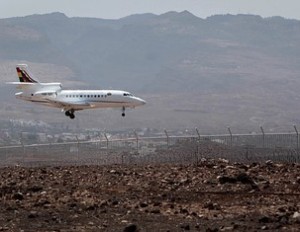 Coming in to land at El Alto (La Paz) Airport

I see Bolivia is a tad more than miffed at having their president banned from flying over France, Italy, Spain and Portugal through their airspace and forcing a stopover in Austria, where Morales consented to having his plane searched for the US whistleblower.

What would have happened if Morales had refused under diplomatic immunity?

Further food for thought; what would have happened if Morales jet had defied the four-country ban and flown over any of those countries? Would they have shot it down? Would the cowards have the balls to do that?

We all know who was to blame for the ban.

The Bolivian president is considering closing the US Embassy as a result, four other South American nations are also considering the case.

“The Bolivian president blamed Washington for pressurising European countries into refusing him passage.

“My hand would not shake to close the US embassy,” Mr Morales said.

“We have dignity, sovereignty. Without the United States, we are better politically and democratically.”” – BBC News

I am beginning to think that he may be right, not only Bolivia,but the rest of the world might be better off without American interference. Politically, Washington is getting too big for its boots.

Imagine if: “”If this had happened to the president of the United States, it probably would have been grounds for war,” said Ecuadorean President Rafael Correa.” – BBC News

This entry was posted on July 5, 2013, 8:28 am and is filed under America, France, South America. You can follow any responses to this entry through RSS 2.0. You can leave a response, or trackback from your own site.