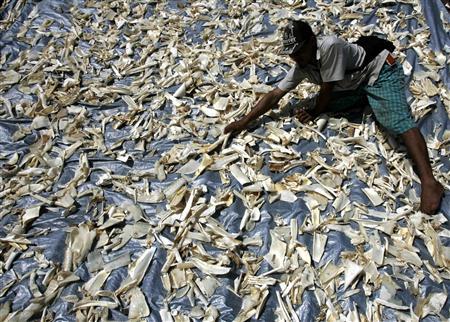 A worker dries shark fins in a fishing port in Banyuwangi in Indonesia’s East Java province in this June 27, 2008 file photo.

(Reuters) – Chinese netizens on Wednesday bit back at a government decision to ban serving shark fin soup at state banquets within three years, mocking it as a timid step by leaders who spend lavishly on other delicacies and are aloof from common concerns.

“You have to wait three years to do this?” demanded Wu Yaxue, a psychologist in Beijing, on his microblog account.

“Given the way Chinese civil servants eat, in three years you won’t need to enforce this ban; the shark fin will be all gone.”

Shark fin can sell for up to $600 per pound, increasing the practice of fishermen sawing fins and leaving the ocean predator to bleed to death. Environmental groups have called for an end to the eating of shark fin soup which is often served at special occasions by Chinese communities worldwide.

China’s has legions of microbloggers on sites like Sina Corp.s (SINA.O) Weibo, which offers a rare opportunity for open discussion, especially on the lifestyle of the communist party elite, though breaching restrictions can lead to arrest.

Others ridiculed the government remarks on shark fin made on Tuesday, saying the decision was aimed at saving costs for official functions, a sore point in China where a growing wealth gap has caused social tension.

“So, are they going to eat panda now?” scoffed another Weibo blogger.

This entry was posted on July 4, 2012, 12:16 pm and is filed under Asia. You can follow any responses to this entry through RSS 2.0. You can leave a response, or trackback from your own site.