The Israeli Sphincter is Quivering

Mr Abbas earlier said he was willing to meet Mr Netanyahu but was determined to push ahead with a bid for UN recognition of a Palestinian state.

The US and Israel oppose the bid and there has been intense diplomacy to avert a crisis over the move.

For further back ground reading:

Today’s train wreck should have been foreseen when Weizzman lied to Truman about Zionist intentions. As with every U.S. president since, Truman was deceived.

President Obama hopes to head off a train wreck in September at the U.N. General Assembly. That’s when member nations plan to press for an independent Palestine.

The Israel lobby is furious.

Yes, the Israelis are close to shitting over this one. This is the worst case scenario for them and their genocidal cause.

For the USA, if they used their veto, it would show them to be the biggest arseholes in the world and they know it!

This is Palestine’s chance to become a responsible nation and it should not be undermined by the US/Israel alliance. 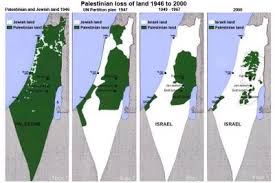 If the USA uses its veto irresponsibly, there should be calls for them to lose their seat on the security council, and further expelled from the UN.

I sincerely hope these ‘talks’ are fruitful for the Palestinians, but they should not desist in their endeavours to become part of the UN.

Israel needs to be brought to heel before they succeed in their planned annihilation of the Palestinian people.

This entry was posted on September 20, 2011, 3:25 am and is filed under United Nations. You can follow any responses to this entry through RSS 2.0. You can leave a response, or trackback from your own site.